People who travel for long periods often talk about how the experience changed them. A researcher called Chaim Noy at a university in Israel did an extensive study what backpackers said about their experience after they returned home. They said they experienced a number of positive changes from an increased level of maturity, greater understanding of others, getting to know one's self better, greater resiliency. They viewed their trip as positively transformative.

Posing the same question to myself, can I say that my India experience changed me? Evolved me?

Yes, but not in the way one might expect. And not the way Chaim Noy found either.

This trip for me was not about a rite of passage (as is commonly associated with travel) or search for an exciting adventure to liven up a life, nor a much-needed rest from a high pressure job (okay, it was a little of that.) Other than requirement courses for my Master's degree, I wasn’t planning on going to India anytime soon. Sure, I’ve travelled a lot and spent a significant amount of my adult life abroad, so this wasn’t particularly novel, but I’m also not burgeoning on adulthood or escaping from parents or attempting to create my own sense of self. At 41, I like to think I know myself pretty well.

What I did learn is that when we leave the security of our jobs, homes, partners, friends, we take on new roles and identities; for me, that identity was not clearly defined. When locals asked me what I did, I found the answer more complicated; I was a student, but I was also a manager in communications for a corporation. (Even “Are you married?” was a complicated question.) Was I first a student, or first a professional? If we look at the range of tourist archetypes, from grungy backpacker to 5 star package tourist, where was I? A traveller, a tourist, a backpacker, a nomad?

I had some of the symbols and markers of a backpacker when we were travelling the first week before residency started (a careful eye on costs, travelling with 20-somethings, journal always at hand) but once residency started and we checked into the 5-star hotel, things became more confusing as I straddled the divide between independent traveller and tourist. However, what I did relish was my ability to move between and through those identities and experiences; I have enough life experience under my belt to gauge a situation and respond appropriately. I can relate to a variety of people from a range of backgrounds in a multitude of circumstances. I can appreciate and play both roles. And most importantly, I learned I still have the resiliency for travel. I have social capital. I pleasured in the experience that comes from occupying both places and the pros and cons that come with either role.

All forms of tourism – whether it be a 5-star package tourist staying within the tourist bubble avoiding unpleasantries of a developing country, or a backpacker on $10 a day testing his or her personal limits – both forms have merit and lessons for the person experiencing it. As one author stated, ... whether you’re with an organized group holiday, or on a three month backpacking trip, you’re still in a foreign country.

The last week in Goa

If anything, Goa has been an interesting and educational ride. I’ve toured spice plantations, walked on the beach, interviewed fellow travellers, gotten sick, scuba dove, ate fantastic food, and fought my way through aggressive hawkers. I’ve now returned from India; over the next week I'll be including my meditations in some of the posts to reflect on how the last 4 weeks have enhanced my personal and professional growth. I know what I have experienced, but what have I learned about intercultural and international communication?

We started class today with an interesting discussion on space and what it means in the tourist realm. As tourists our space is a tourist bubble where we are removed from the unpleasantness of life. We don't make our own beds, deal with corrupt police, argue with the phone company, or struggle with the day to day frustrations that most Indians face. Even sitting in a restaurant provides a certain level of distance from reality, as does renting a lounger on the beach, as hawkers and beggars are shooed away.

We opted to explore our space at Baga beach. It's a large and busy beach with plenty of people ready to offer massages, manicures, jewellery and sunbeds for rent. In spite of all that, we had a great time listening to the waves and walking on the beach, which we claimed as "our space."

Being in Goa, as beautiful as it is, it's hard to avoid the constant harrassment of hawkers. Seemingly every 10 seconds I was approached by someone offering something. Sometimes they arrived in large groups, sat down in front of us, and would not leave. I often felt like I had ceased to exist as a human being but rather was transformed into a commodity to be exploited. Attempting to be respectful to the sellers (who clearly had learned from tourists before me that I was in fact there to buy all sorts of goods and services) quickly faded as my patience grew shorter as time passed. What I realized was that in the bigger picture, the behaviour of the sellers was not the problem; it was the thousands of tourists who came before me that had contributed to this conflict. As tourists we want comforts and access to goods and services, but we also want it on our terms. What we find annoying, they view as an opportunity to earn enough to feed their family for one more day. And with limited opportunities for economic prosperity for so many Indians, who can blame them? 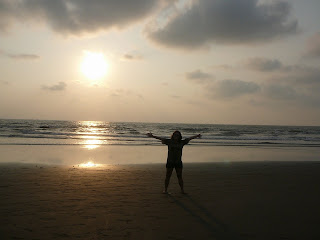 After 10 days in an industrialized, noisy, smoggy city of 5 million people, as students we had pretty high expectations of Goa. After a flight to Mumbai and then to Goa, we arrived to palm trees, fresh humid air, and billboards for liquor. However, life is such that if your expectations are too high, you might be disappointed. Our hotel is partially under renovations and not on the beach, so immediately it put a damper on our nirvana-like expectations. Many of us (not me) had to deal with malfunctioning toilets, power shorts and bed bugs. Add in 30 people who have been travelling together for the last two weeks and it's understandable that tensions might run a little high.

This gave us our first lesson of Goa around tempering expectations and understanding our own personal limitations in achieving our own standards of comfort. Some people's standards are simply about a clean bed and working shower, while others need high speed internet access and goose down pillows.

For me, I was a little nervous about travelling again as it has been a while since I was outside the tourist enclave as an independent traveller, moving on a budget, negotiating for every purchase. I wondered if staying in nice hotels at beach resorts where every whim was anticipated had made me soft? Through this process I've learned my preference is somewhere in between the hard core budget traveller and those seeking greater comforts. Amenities like a pool or wifi are nice, but can live without all of them as long as it's safe and I don't have to worry about a cockroach running over my head while I'm sleeping.

Tomorrow we leave for Goa, which, unlike Gujerat, is not a dry state. The look of shock on 30 students' faces upon discovering that Gujerat is completely alcohol free, was plainly obvious. For me, who admittedly enjoys a glass or two of wine rather frequently, the news came as a shock, particularly as we'd just been in the dry town of Pushkar and I was looking forward to cold glass of beer or a frosty margarita, which in my view are necessary pairings with 30-plus degree heat and a tropical vacation.

What I learned from this

This experience is as much about doing things differently as anything else. I have become accustomed to having access to certain things when I want them; clean water, safe food, and a decent bottle of California red. From the academic articles I've read on tourism, this is not unusual. Tourists want to experience "untouched" or "unspoiled" spaces, but still want wifi and hamburgers on the menu. While I thought I was not like that, perhaps I am? Admittedly, I thought the absence of alcohol would somehow take away from the overall experience and put a damper on the celebratory atmosphere, and I can't say if it did or didn't – it was what it was. It didn't diminish my experience, but it did change it. I found delicious replacements for cocktails; a lemon or mango lassi (yogurt blended with fruit and honey) and lime sodas (fresh lime, sugar, and soda). While no substitute for a good Shiraz, I found going dry involuntarily for 10 days almost a liberating experience. It allowed me to question my expectations and needs and become just a little bit closer to the Gujerati lifestyle that went beyond buying some cool comfortable Indian-style clothes and eschewing meat for a month (most Indians are vegetarians). In my own meager way, these few simple acts brought me greater understanding of Indian lifestyles, at least on the periphery.

I'm fairly used to travelling to exotic lands and being the "other," but Ahmedabad is unique. It is not a tourist destination, and our hotel was predominantly a place for Indian businessmen.  In the entire 10 days I was there, I saw one Chinese couple and one white family, both of whom were at our hotel.  As such, we were stared at wherever we went (particularly as women) and whole groups of men on the street would simply stop and stare.  Phillip, our program head, calls it "being a rock star."  We never got harrassed, only the odd "hello where you from?!"

At first, it was somewhat unnerving, but I did get used to it once I realized that being stared is more about curiosity and less about threatening behaviour. After a few days I even began to enjoy the attention of being the novelty act for a while. Upon reflection, I realized that I appreciated the attention because I'm not someone who naturally stands out in a crowd.  It felt nice to be unique.

This morning was our last outing in Ahmedabad as a group, to the famous National Institute of Design.  The school was founded in the 1960s by a textile merchant family, endorsed by Charles Eames, and has become the foremost centre of design training in Asia.  Some 7000 applications come in for 250 spaces within 17 disciplines from textile, furniture and housewares, to graphic design. We had a short tour of the campus, more tea, and had a talk from the current director.  What I found particularly interesting is NID's work in fostering artisan craft in remote areas for development where few other resources exist. NID is helping artisans connect to the marketplace and as such, is preserving craftwork that has been passed down through generations.  So next time you go into a shop such as Ten Thousand Villages or an Oxfam shop, look for handicrafts from Jiwaja in Rajasthan!

Tonya
I'm a communications professional and grad student in Vancouver, Canada. I have a penchant for travel and collect obscure languages. My goal is to figure out how to blend the applied and academic worlds of communication.